From Fochabers to the Fleadh

The Fleadh is nearly here with crowds about to descend on County Louth for a celebration of Irish traditional music, song, dance and language and we’re enjoying the build up as well as gaining new perspectives on festival culture and attitudes to music, traditional or otherwise.

We were fortunate to get back to Speyfest again in July. As well as facilitating workshops and performing, we had a chance to continue our immersion in the festival experience and continue to write our fieldnotes (in language and music). Speyfest has become an important research project for us and had offered us an opportunity for regular fieldwork over a number of years (and we’re not finished yet!).

This year we were delighted to include some of our own compositions inspired by Speyfest and Fochabers. Some of these tunes had been performed by the DkIT Traditional Music Ensemble on Céilí House earlier in the year and some had featured on the documentary Finding Fochabers made with Desmond Ooi. Composition and film making are two aspects of our research activity that have allowed us to reach out to different audiences and such challenge us to respond to our field experiences and communicate this in different ways. Artistic outputs through film, performance and composition are increasingly important in musicology, ethnomusicology and geography. Following Harriet Hawkins recognition of artists’ changing orientations towards ‘site’ and the ‘materialities’ and ‘practices’ of making (keywords that have usually been articulated as intrinsically geographic, and applied to the art world), we consider how our artistic practice engages with place and reflects geographies of music. While these ideas are further explored by Hawkins in relation to the visual arts in For Creative Geographies: Geography, Visual Arts and the Making of Worlds (2013), our work follows in a musical sense as our geography-art intersections come to encompass not only relationships built through interpretation, but also those built through shared practices, as we work as and with artists, curators and other creative practitioners. All the while we are still also seeking to develop answers in language and engage with the writings of our peers to generate a better understanding of music, culture and geography.

The workshops were a great success this year, thanks in no small part to the organisation by Laura Davidson and the help from Diane Stewart. Another aspect that was invaluable to both us and younger participants was the willingness of older and more accomplished teenagers to participate and mentor younger learners. While two separate sessions were offered aimed at beginners and improvers, two of the more experienced fiddlers, Abbie and Briony, assisted us, as did local teacher Amy Souter. It was wonderful to see Abbie and Briony on stage later with the Broma Céilí Band. Having had the pleasure of their participation in workshops since 2016, it has been great to witness their development both in terms of music and confidence during our visits and we look forward to hearing them again in the future.

Speyfest once again presented a diverse line-up. We were particularly struck by the family friendly nature and atmosphere at the festival this year and some of the steps taken to nurture this. A local community identity remained at the core of the festival but it was not insular and visiting artists once again broadened the festival’s soundscape.

We arrived in Fochabers in time for the Thursday night session in Spey Bay. The repertoire and faces are increasingly familiar and the session embodies a community spirit. It is perhaps the only time during the festival when such a session takes place, in contrast with many Irish festivals where such activities are at the core of the festival (provided you can get a seat and a comfortable corner).

Iona Fyffe and Eddi Reader were among the headline acts that we enjoyed. Although artists at different stages in their careers, they demonstrated some similarities in their approach, although Reader’s repertoire was undoubtedly more eclectic. Fyffe drew on Scottish traditional song and American folk song, which reflected the focus of two of her recent albums. Reader drew on her extensive back catalogue but included crowd favourites such as the Robert Burns’ classic ‘My Love is Like a Red, Red Rose’. On our travels in Scotland we took a little time to visit the monument to Burns at his birthplace near Ayr and the beautiful village of Alloway. It is interesting to contrast the landscape of Burns' south east corner, the highlands and the north east corner where we were located and consider how these can merge in the popular imagination of Scotland despite their differences. 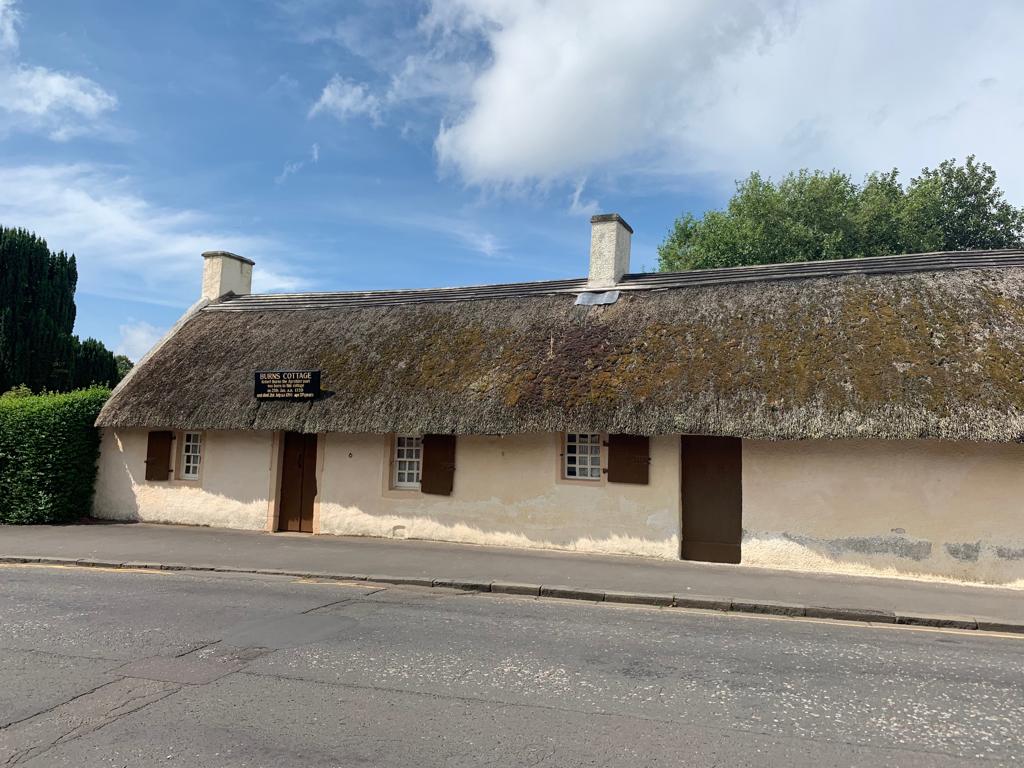 Similar differences may be observed in our visits to Scone Palace and Balmoral Castle, where stories imbued with ideas of cultural identity take on different emphases although they might be similarly packaged for a tourist audience. In Heritage and Tourism (Staiff, et al 2013), Emma Waterton notes ‘At most destinations, the haphazard collection of brochures and related paraphernalia can generally be used to piece together an official sanctioning of what a heritage tourism site ought to “look like”. […] while the images used are likely to be quite blatant in terms of promotion and market, their composition will also have far more subtle things to say about matters of power and exclusion. […] any negotiation between what is hidden and what is manifest is meditated by discourse.’ (p. 64). Like the authors of Heritage and Tourism we find it very interesting to engage in the dialogic relationship between heritage places and people and, in our case, reflect this in our music, as we have done recently in Youghal and Fochabers.

Regionality was again evident in the wonderful music of Saltfish Forty who brought great music from the Orkney Islands to Sunday’s proceedings. Orkney was also well represented by Fara, who draw on the influence of Douglas Montgomery from Saltfish Forty but presenting a more complex approach to harmonic arrangement utilising the three fiddles and voices. As a contemporary Scottish fiddle band, Blazin’ Fiddles continue to showcase the Highlands and Islands’ distinct regional fiddle styles. Although their line-up has changed over their twenty one years, the energy remains and they have a full bodied performance for the Speyfest audience.

The sense of community at Speyfest is reflected in a number of activities. The family day includes a local craft fair. The participants in the workshops get their chance to perform on the stage, as do the finalists of the Speyfest Young Entertainers competition. The Sunday morning religious service was an ecumenical cafe with contributions from various groups and religious leaders. And as per tradition, the Fochabers’ Fiddlers gathered to perform on Sunday evening. Although we have heard them on each of our visits, the sound, energy and synchronicity of the group remains impressive. Aside from the acts, it was wonderful to meet up with friends and experience the warmth and hospitality of John Mehigan, George McIntyre, Jim and Janet Hallyburton, Alison Stewart and James Alexander.

The late night STOMP is another aspect of Speyfest that we have commented on in previous years. Featuring high octane groups with a desire to push the amps to 11 they benefit from the excellence off the sound and lighting at the festival. They attract a different crowd to the earlier events and create a different atmosphere but also reflect a desire of the founders to feature the best in contemporary Scottish music as well as emerging traditional artists and local groups. Perhaps William Marshall remains in the background, buried in nearby Bellie Churchyard, but he may have appreciated the innovation and imagination demonstrated by the artists over the weekend. While there was little concern about the “Scottishness” or “traditionalness” of the artists at Speyfest, some of the commentary around some of the artists for Fleadh Cheoil na hÉireann focused on their connection to traditional music. Admittedly the stated aims of the festivals are different but the diversity of music at the Fleadh reflects the growth and diversity of the community that forms around the event. Away from the media glare that can sometimes highlight the commercial artists, there are lots of spaces for family engagement and performances by community groups. These include two of the main aspects that we have contributed to organising - Seachtain na Gaeilge and the Fleadh Cheoil Gig Rig. With a lot of the organisation now done, we have had a chance for some rehearsals also. We are looking forward to performing on the Gig Rig as A Louth Lilt with our friends and former students Conor Walsh and Ciara Brannigan on Monday 12th August at 6.30pm. On Tuesday 13th, Adèle will present a lecture on the Siamsa Céilí Band, fifty years after their famous 3-in-a-row success in the senior Céilí Band competition at Fleadh Cheoil na hÉireann. We look forward to contributing a song as gaeilge to the launch of Seachtain na Gaeilge in the Highlanes Gallery later that evening when Adèle will be bean an tí. On Wednesday 13th August we are delighted to be celebrating the contribution of Fr Pat Ahern to Irish culture at a dinner celebrating him as Ard Ollamh, at which Daithí will be fear an tí. On Friday afternoon we are facilitating a symposium on Culture and Community. Chaired by Daithí, Adèle will feature amongst the speakers and give a presentation that focuses on voluntary community efforts in Louth. On Saturday we will be on the Gig Rig twice - first with the Oriel Traditional Orchestra at 2pm and later with Brian O’Kane and friends at 4.40pm. It is fifty years since Brian was part of the Siamsa Céilí Band triumph. On Sunday 18th August we will be back with the OTO when they join forces with the Lourdes Brass Band for Aifreann na Bhfleidhe and again on Monday 19th when the OTO will open the ‘Farewell to the Fleadh’ concert in the Barbican.

Speaking of the OTO and the links between culture and community, we are also delighted to be celebrating the nomination of the OTO for an EPIC award. They will now go forward to compete for the Ireland award as well as being part of the public vote for the People’s Choice Award. Voting is open on www.voluntaryarts.org and closes at 5pm, Monday 2 September. All of winners will be announced at a ceremony at Edinburgh's Central Hall on Thursday 3 October 2019.

The Oriel Traditional Orchestra is a voluntary cross-border, intergenerational community orchestra established in September 2017. With members from Louth, Meath, Monaghan and Armagh the OTO concentrates on Irish traditional music repertoire from the Oriel region arranged especially for the orchestra. The repertoire includes some of our compositions including Daithí's suite for traditional orchestra ‘The Oriel March’ which premiered earlier this year.

Intergenerational sharing of music, the focus on the music of the region, and the inclusion of newly composed music by members in the repertoire of the orchestra are aspects of the OTO being recognised by the nomination for the EPIC award. The OTO also provide access to instruments and organise workshops open not just to orchestra members but also to the community who may not otherwise have access to such a facility. To vote for the Oriel Traditional Orchestra go to https://www.voluntaryarts.org/epic-awards-peoples-choice-voting.

So if you're in Drogheda for the Fleadh, stop by and say hello. If you don't make it and are instead in the far south of the country don't forget that Ceolta Sí continue with their Seisiún on Mondays and Thursdays and it features some music and songs that we composed for them. If you can't make either, hopefully you will find opportunities to enjoy music and culture wherever you are.

Southbound with the Snowdrops